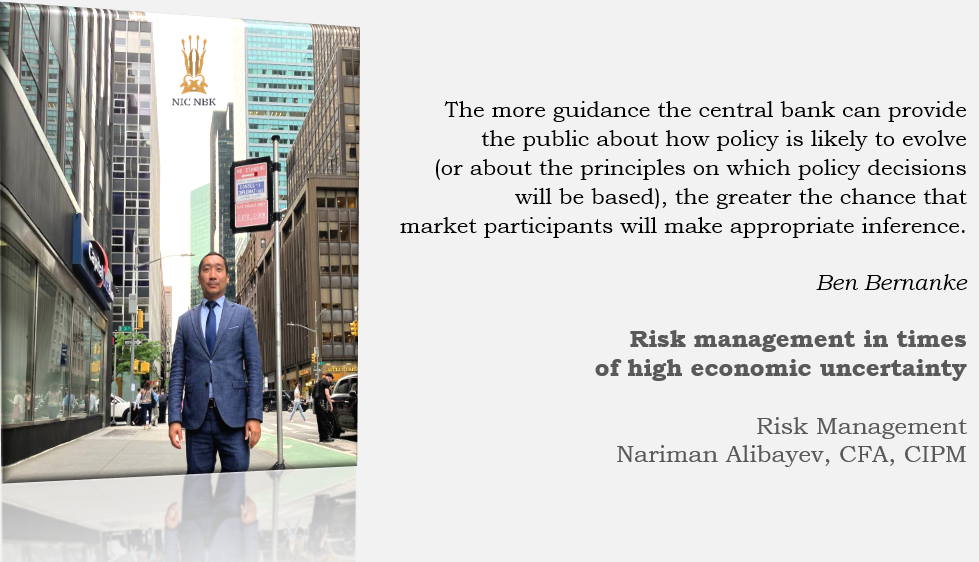 - Good afternoon, dear readers! The current global macroeconomic situation is characterized by high inflation and the expectation of recession in the U.S. and Eurozone. The monetary policy of Western central banks has been aggressive for a long time. For example, from March 2020 to March 2022, the U.S. Federal Reserve kept short-term nominal interest rates at zero, and used quantitative easing to increase its balance sheet from $4 trillion to $9 trillion. In addition, there was a sharp fiscal expansion that began in the spring of 2020 in response to the COVID-related recession. All of this eventually led to a sharp and significant price increase. In addition, negative supply-side shocks, also related to COVID, in particular the "zero Covid" policy in China, and geopolitical environment, especially after the outbreak of a conflict in Ukraine, led to higher prices. Inflation has reached historical highs in many countries. To reduce inflation, central banks are tightening monetary policy by raising base rates and curtailing quantitative easing programs.

- Are these measures sufficient to contain inflationary pressure?

- Monetary tightening has already begun to affect the economy and now there is a transition period. It is difficult to make predictions about the timing. The inflation basket includes various categories of goods and services, which depend to varying degrees on energy prices, commodities, wage growth, rent and construction costs. Supply chain disruptions and rising raw material and energy prices at the beginning of the year caused commodity prices to rise. Supply chains have now normalized and commodity prices have declined, reducing inflationary pressures. At the same time, increases in labor cost and rent, which together affect a large portion of the CPI basket and are the more inert components of it, are putting inflationary pressure, particularly in services.

Structural imbalances in the U.S. housing market and rising mortgage rates have reduced housing affordability and contributed to rising rents. At this time, there is a decline in home sales and completion of houses under current construction is expected soon, but how quickly this will affect rents is difficult to predict. Rising spending levels are contributing to requests for wage increases. The current U.S. labor market is characterized by historically low unemployment and a large number of new jobs. Labor shortages are pushing up wages. The Federal Reserve is trying to reduce economic growth and stabilize the labor market without a significant increase in unemployment, but it remains determined to control inflation by tightening monetary policy further.

- Nariman, please tell us how the situation affected financial markets?

- Since the beginning of the year, the Fed raised interest rates by 3% and the 10-year Treasury bond rate has increased by 270 bps. This, by the way, is the fastest monetary policy tightening since the 1980s. As a result, since the beginning of the year, equity markets have exhibited a significant correction in the wake of rising rates. More vulnerable to rate hikes are companies with a high debt burden, companies in the growth stage, the so-called Growth, mostly in the technology sector, whose main cash flows are expected in the longer term, as well as classic bonds, especially long-term bonds. Thus, as of the end of October, the Nasdaq Composite index of technology companies had lost 31% since the beginning of the year, while the Dow Jones industrial index lost 16% and the S&P 500 lost 21%. At the same time, the observed correction mainly reflects the growth of the discount rate, which reduced the internal value of companies, i.e. the present value of future cash flows.

- However, in the middle of the summer we saw the markets grow. What do you attribute this to?

- That's right, last summer the markets showed double-digit percentage gains from the lows of mid-June. Behind this rise was the assumption that lower inflation would slow the pace of Fed’s interest rate hikes. A good U.S. reporting season also contributed to the rise. However, the likelihood of softer Fed policy was overestimated, and investor optimism faded after Jerome Powell's hawkish speech at the Jackson Hole symposium in late August. The Fed’s chief reaffirmed its determination to keep monetary policy tighter in order to fight inflation by raising and holding rates higher for longer, even to the detriment of the economy. As a consequence, markets increased the likelihood of further interest rate hikes, their expected level, and recession risk.

- Nariman, in your opinion, do you see the potential for a further downward market correction?

- The market correction up to the current moment reflected, to a greater extent, the change in the discount rate. At the same time, companies' revenues did not show negative surprises by the results of the 1st half of the year. Consumer confidence and nominal consumption remained at the same levels and showed the expected growth dynamics. Going forward, markets largely expect the round of monetary policy tightening to be completed soon, economic growth to slightly slow down, meaning the "landing" will be fairly mild, and inflation to fall quickly to the desired level, that is, to around 2.8% in 2023 and 2.3% in 2024, which will allow interest rates to fall in 2023, which in turn will restore risk premium levels.

There is a perception that significant slowdown in economic activity (and corporate earnings) and rising unemployment, which would slow wage growth, are needed to bring inflation down from current highs to expected levels. That said, there is a possibility that central banks will backtrack, allowing inflation to exceed the target level, which could lead to stagflation and additional rounds of tightening. The likely near-term economic slowdown and its impact on corporate earnings, a prolonged period of inflation above the target, possible additional rounds of monetary tightening, and reduced market liquidity are not fully accounted for in current prices. The level of growth may turn out to be lower than expected, and the recovery period may take longer. Therefore, the probability of continuation of the negative trend in the U.S. stock market is still quite high. By the way, recent disorders in the government bond market in such developed country as U.K. are the first signs of potential financial instability.

- Nariman, can you tell us what strategy the NIC is pursuing in current conditions of high economic uncertainty?

- During stagflation, global markets become more vulnerable to corrections, and both major components of any traditional asset portfolio - long-term bonds and global equities - suffer, potentially leading to large losses. In this environment, production costs are rising faster, reducing companies' profit margins. Demand and profit growth are falling short of forecasts, and rising central bank rates are driving up the cost of servicing and refinancing debt. Companies with regulated tariffs, which are unable to pass the increased costs on to selling prices, may suffer. Companies with high debt burden, start-ups overvalued by market multiples, and companies lacking sufficient liquidity cushion are also more vulnerable to higher rates. In such an environment, preference is given to assets that have low correlation to markets and provide protection against inflation, such as hedge funds, real asset classes like real estate, infrastructure, precious metals, and commodities. In alternative markets, for example, certain real estate and infrastructure sectors provide inflation protection, stable cash flows, and are also a source of structural growth. For example, transition to alternative energy, focus on food, cyber and commodity security present a wide range of opportunities around the world. On top of that, there are hedge funds that invest clients' money in a way that they get risks other than the market risk. In other words, it is the risk of decline of the market and security prices. Hedge funds are absolute return instruments, providing low beta returns and high alpha. In addition, hedge funds use short positions, also called "shorts". They are a kind of bet against the market or individual issuers when an investor or fund sells assets it does not own, in anticipation of their future decline. This asset class allows to reduce the risk level of the portfolio.

Therefore, controlling liquidity risk and the risk of default on investment commitments plays a special role in alternative investment portfolio’s risk management, especially in times of high uncertainty. During market corrections, market activity and, accordingly, investment realisations decline, which reduces the amount of distributions by private market funds. This is partly offset by a reduction in capital contributions for new investments. In order to ensure stability, avoid excessive volatility in growth and portfolio structure and control liquidity, the NIC builds an investment plan for a period of 5 years and updates it at least once a year, taking into account the economic situation, market dynamics and portfolio structure.

I should add that the asynchrony of implemented monetary policies, differences in the strength of economies, and increasing geopolitical tensions require more careful management of currency risks. Depending on which currency is the base currency, the difference in local and base currency yields over the past 18 months could be as much as 30%. Currency volatility also increases portfolio volatility. In this regard, special attention is given to hedging currency risks.

Therefore, to minimize risks in the current environment, the NIC is disciplined in diversification, maintenance of liquidity cushion and compliance with established limits.

- Nariman, thank you for the interesting conversation. We wish you success in your work!