INVESTING IN THE INFRASTRUCTURE ASSET CLASS AS A HEDGE AGAINST INFLATION 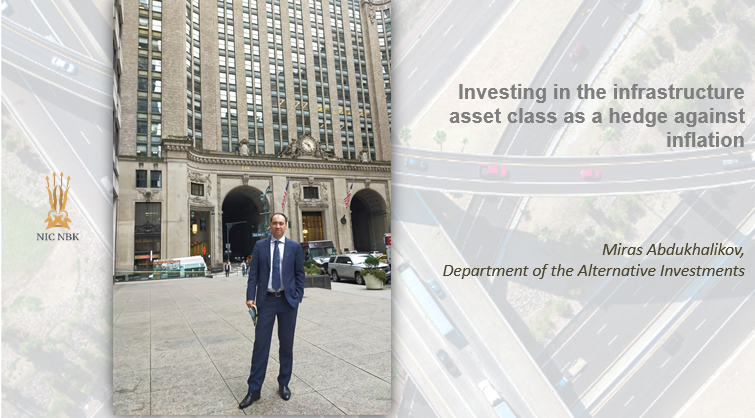 - Good afternoon, Miras! Could you please tell us what we mean by infrastructure investments?

- Good afternoon! Of course. First of all, we should start by saying that infrastructure generally refers to any long term facility, construction and/or installation that is necessary for the operation and functioning of society.

By the way, the first type of infrastructure is mainly financed by the government or a PPP, with the consumer paying indirectly through taxes, whereas consumers pay directly for the use of economic infrastructure services.

- How do investors classify infrastructure investments?

- What are the key differences between this asset class and other alternative asset investments?

- First and foremost, infrastructure is often capital intensive and has a long asset life. It is also traditionally regarded as a low risk and hence low return investment. The low risk can be explained by the fact that infrastructure assets tend to generate stable cash flows due to long-term contracts and, in many cases, a monopolistic market position, which also protects investors from large losses.

Due to its characteristics, returns on infrastructure investments have historically had a low correlation with other asset classes, which is a huge advantage for investors looking to diversify their portfolios. In addition, this asset class is more resilient to market fluctuations and economic cycles and less prone to price volatility. Against a backdrop of current turbulence, rising inflation, falling equity markets and rising interest rates, all these features of the asset class are generating huge demand from investors, as can be seen by examining how infrastructure funds have attracted investment this year. According to publications in the “Infrastructure Investor”, while in recent years fundraising by infrastructure funds has ranged between USD 120 billion and USD 140 billion, in just six months this year, managers were able to raise more than USD 100 billion. In addition, infrastructure is one of the fastest-growing asset classes in the private market space and is expected to soon exceed USD 1 trillion in assets under management.

- Explain why infrastructure is considered a protective asset against inflation?

- One of the main advantages of investing in infrastructure is that returns on this asset class are less correlated with GDP and more protected against inflation. The reason for this is that most infrastructure provides essential and critical services to society, the rates for which depend directly or indirectly on inflation. In addition, as mentioned above, companies operating infrastructure often operate under long-term contracts with customers and consumers of their services whose tariff methodology is usually known to all parties in advance and is often subject to government regulation. For some types of infrastructure, the correlation with inflation can be even higher than 100%, which means that if inflation rises, the return on that asset will even be higher per unit of inflation. It is these characteristics that are of particular interest to investors in the current turbulent market environment and especially after it became clear that high levels of inflation around the world are not a temporary problem as previously expected.

- Can you please tell us what trends are on the market?

- Recently, investors have been investing massively in core infrastructure, which typically includes assets located in developed countries with a steady source of income, a robust business model and minimal operational risk. This was because investors were seeking alternatives to bonds during a period of low interest rates following the introduction of quantitative easing by central banks. Infrastructure proved to be an asset class that could provide higher fixed income with a similar risk and return profile to bonds. For example, according to data from Hamilton Lane, the annual average yield on so-called "real assets" (infrastructure and real estate) between 2010 and 2019 was 7.5%, compared with a bond yield of around 3.7%.

Today, in light of rising interest rates in response to accelerating inflation worldwide, investors have started to be attracted by funds focusing on riskier strategies and value added strategies (core+ and value added). Investments in these strategies offer higher returns in absolute terms, but are also riskier and require significant capital expenditures.

- Which sectors are most attractive to investors today?

At the moment, one of the most popular sectors in the infrastructure market is the transition to alternative energy sources. Surveys among major infrastructure investors show that the vast majority of investors are interested in developing solar and wind energy. It is important to understand that the energy transition involves not only the generation and distribution of electricity by alternative energy sources, but also the decarbonization of existing infrastructure, including aviation, railways and seaports. The main reason for the popularity in this area is undoubtedly climate change and the measures that countries around the world are taking to combat climate change. Also, in light of recent geopolitical tensions around the world, energy security is becoming an urgent issue which in turn creates a need to raise funds to finance infrastructure projects.

-Miras, thank you for an interesting talk. We wish you and your team all the best for your work!